To see all photos of our visit please see here

The Appley Bridge meteorite fell at around 8.45pm on the 13th October, 1914. World war one had only just begun in August and with the air raids at the time and the prevalent ambience of fear of an attack of it was no wonder that locals were convinced that the event was actually a bombing raid by German Zeppelin airships.

The first reports of a fireball in the sky were from Stoke on Trent but there were subsequently hundreds of eye witnesses in the local Wigan area. Some of the locals even reported hearing the buzzing of the Zeppelin engines!

The meteorite was found by two locals walking in the field the following morning. They were surprised to discover a hole in the ground two feet across and 2 feet deep in the ploughed field. They went and got the farmer, Eric Lyon who helped dig out the meteorite which had broken into two pieces and was subsequently taken back to his farmhouse.

The local doctor, a Dr. Wilson visited Mr. Lyon at the farmhouse and wrote the following for a local newspaper “The mass is just like a large stone, irregular in shape, and externally of a reddish colour similar to the appearance of rusty iron, or of iron drawn from a fire.”It is also very friable, pieces can be broken from it by the fingers alone. Internally the prevailing colour is that of French grey, the material is of varying hardness, and some parts having the resemblance of lead. It is about 30 inches in circumference and weighs about 30 llbs”

The police were also informed and after attending the farm officers promptly took the meteorite away to Lancashire Police headquarters in Preston to be investigated by a senior Police officer. The subsequent reports from Superintendent Kelly dispelled the rumours of a German airship attack and he stated that “There is no doubt, that it is a genuine meteorite”

After being released from Police custody the meteorite was delivered to Professor Jenkins at the Godlee Observatory in Manchester. On arrival at Godlee the pieces had a total weight of 28 llbs and 13 oz. compared to over 30 llbs on initial discovery so some of it had obviously been removed in the interim. Whilst at the observatory it was examined by Dr. George Prior from the British Museum of Natural History and also chemically analysed by researchers from the Manchester School of Technology. (Link to Professor Jenkins report)

A small fragment of the larger mass went on to be displayed in James Rigby’s grocers shop window in Appley Bridge to show locals that it was in fact a rock from space that had caused the ominous thunder like noise and not a German army bombing raid.

The main mass was subsequently returned to Mr. Lyons and he retained custody of it until 24th January 1920 when he sold it to the British Museum of Natural History for £252.

Well, that’s the brief story of the Appley Bridge meteorite and its recent earthly history.

Being the nearest meteorite fall location to where I live and having a passion for UK and Irish meteorite specimens meant I had planned to visit Appley Bridge for a long while. Finally, in October 2012, prompted by Luther Jackson organising a group BIMS visit, I found myself driving through the Lancashire countryside to meet up with some other meteorite aficionados. Luther’s sister actually lives in Appley Bridge so he had made the trip up the day before to stay with his family. On a rather misty autumn morning myself, Keith Mahood, Matthew Smith, Luther Jackson and Luther’s brother in law Matt Thorn met up on the main road through Appley Bridge near the actual ‘Appley Bridge’ ready to explore the fall site. 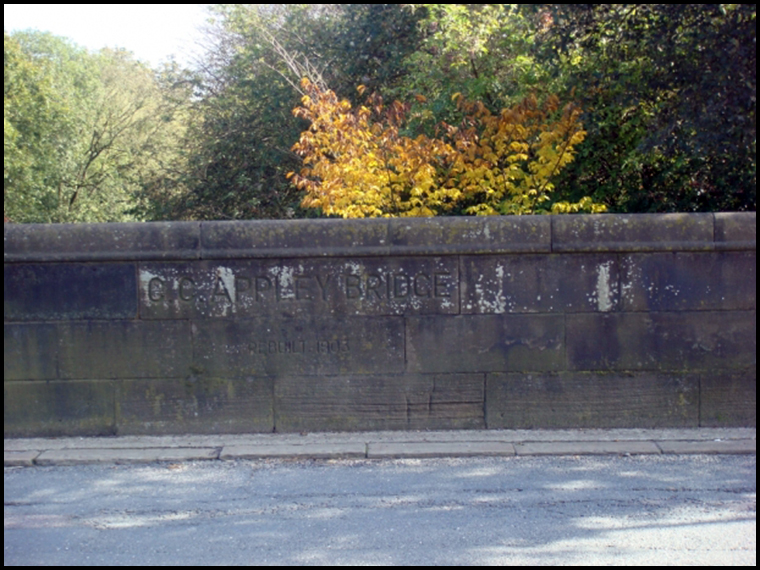 We knew the fall site was a field that was part of the Halliwell Farm estate and so from the main road we followed the field boundaries up towards Halliwell Farm. With some consulting of maps and historic accounts we eventually found what we believed to be the fall location. After a few photos and some scrabbling in the bushes and field boundaries for likely looking stones, we headed for the Farm itself. 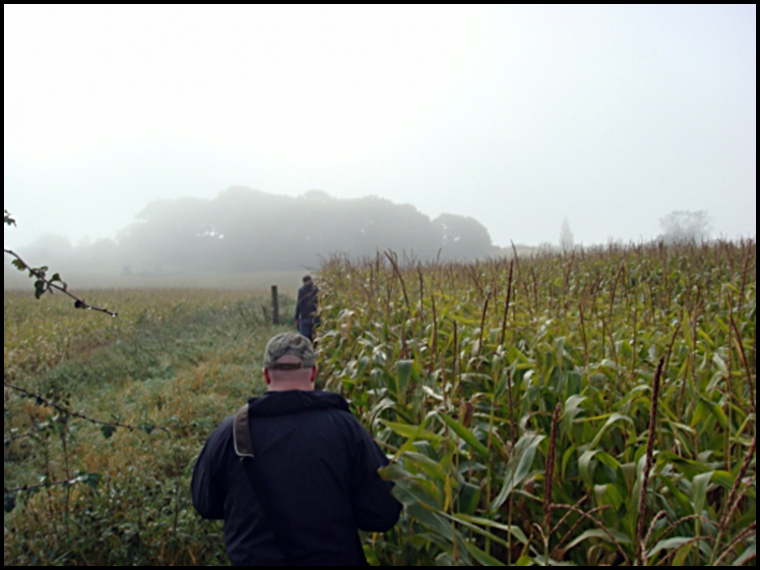 Halliwell farm is currently owned by David and Valerie Edwards and after a quick group photo at the gates we walked up the drive and introduced ourselves. Matt and I had a chat with David and Valerie and we expressed an interest for BIMS to put on some sort of meteorite display at Appley Bridge in the future. They were friendly and helpful and I exchanged contact details with them for any future plans that we had.

On the way back to the fields we say an impressive and imposing looking statue in the Farm’s gardens, something that you wouldn’t want to come across on a dim moonlit night! 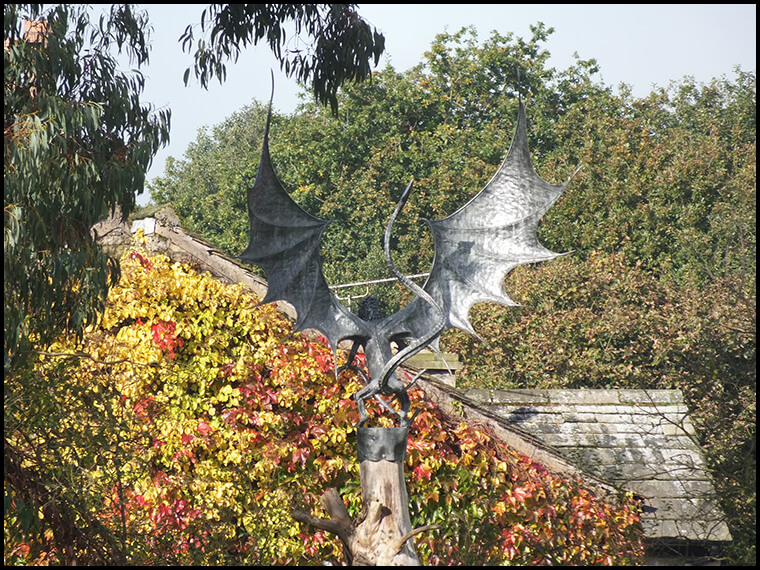 An interesting statue in the grounds of Halliwell Farm

Keith and I had brought along our collection specimens of Appley Bridge and we couldn’t resist taking a photo of us bringing them back to their original fall site. 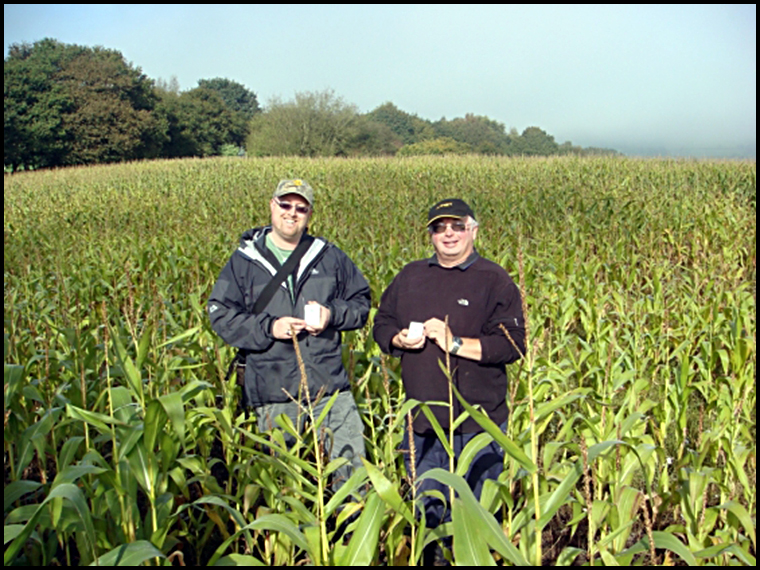 Myself and Keith with our specimens of Appley Bridge in the field where it fell. (Photo courtesy of Luther Jackson)

The mist had now mostly lifted and the sun was out making for a pleasant walk back down the fields towards the village centre. After meandering back to our cars we decided that it was too soon to be going home so we headed to the local pub for some lunch. We were joined by Luther’s wife Juliet, son Max and sister Josie and we all enjoyed a nice lunch before I had to head back home.

It was great to visit the site of this historic UK fall, and to imagine the impact pit in the fresh ploughed soil as found by the two locals on 14th October, 1914, what a fantastic find that was!

To see all photos of our visit please see here