Intro to Meteorites in ‘Staly Mag’

Through a mutual friend Nick Howes I was contacted by local amateur astronomer Lisa Mather. Lisa runs an astronomy society and also writes a column for a local community magazine. We exchanged many emails and she asked if I would answer some meteorite related questions for an upcoming ‘Intro to meteorites’ article for her column which of course I was happy to do. Shortly afterwards I received a set of questions from Lisa and after some more discussions I sent off my answers. 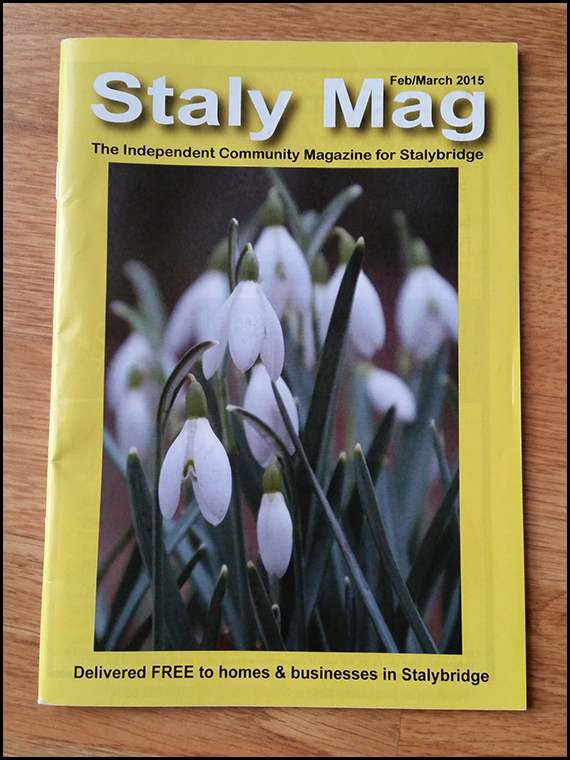 The ‘Staly Mag’ is a locally produced community magazine.

The resultant article was published in the February/March 2015 issue of the magazine, slightly delayed due to Lisa being poorly. As I live outside of the catchment area for the magazine Lisa very kindly sent me a copy. It was good to meet Lisa face to face at North West Astro Fest 2014 where we were of course talked more space rocks 🙂 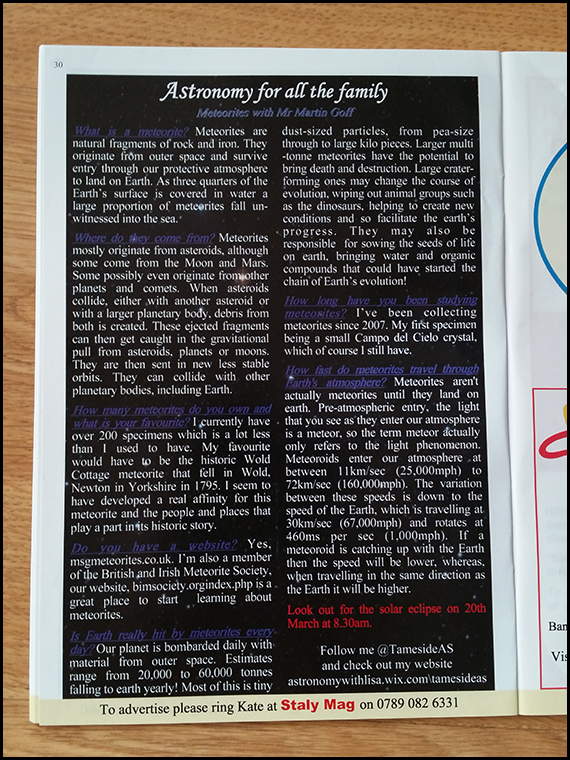 ‘Intro to meteorites’ article as published in the ‘Staly Mag’

Below, you can see the full set of questions I was given and my full answers:

Meteorites are natural fragments of rock and iron that originate from outer space and have survived entry through our protective atmosphere to land on Earth’s surface. Meteorites can fall at any time and can land anywhere. Given that three quarters of the Earth’s surface area is covered in water and meteorites fall pretty much anywhere then a large proportion of them fall un-witnessed and un-recovereable in the sea. Also a lot fall in remote areas where they are not witnessed, so it’s not surprising that actually very few new meteorites are recovered each year.

Throughout history meteorites have captured our imagination and they have been seen as portentous omens, both good and bad. ‘Iron from the sky’ was used by ancient peoples all over the world from the Arctic to the Sahara with evidence found of meteorites being used to make tools and weapons. They have been found in tombs and burial chambers,  with obvious reverence given to them by the people who placed them there. Falling from the sky, shrouded by myth and superstition, many believed them to be sacred objects and they were often venerated and worshipped as such.

Meteorites are collected today not only as important objects scientifically but also as beautiful and fascinating specimens in their own right. To be able to hold in your hand a mysterious rock that is older than the Earth itself evokes a huge feeling of wonder and gives you great perspective on the huge scale of the Universe both spatially and in its immense age. To put it very simply, meteorites are amazing!

2) Where do they come from?

Meteorites mostly originate from asteroids although some come from the Moon and Mars. Some possibly even originate from other planets and comets. When asteroids collide, either with another asteroid or with a larger planetary body then debris from both is ejected into space. These ejected fragments can then get caught in the gravitational pull from other large asteroids, planets or moons. They are then sent in new less stable orbits which means that they can collide with other planetary bodies, including Earth.

I used to collect fossils after having a childhood fascination with dinosaurs. Many fossil dealers also sell the odd meteorite and following some research into the extinction of the dinosaurs that is theorised to have occurred due to the fallout from a large meteorite impact I bought my first meteorite specimen. The rest is history!

4) How many meteorites do you own and what is your favourite?

I have changed the focus of my collection a few times since I started this hobby but being half English, half French, my main collecting focus is on UK/ Irish and French meteorites . I purchase and trade specimens from and with fellow collectors and dealers to further my collection. My collection has reduced in size over the last few years as I try and concentrate on fewer,  better ,more high quality specimens rather than just numbers. I currently have over  200 specimens which is a lot less than I used to have. My favourite would have to be the historic Wold Cottage meteorite that fell in Wold Newton in the Yorkshire Wolds in 1795. I seem to have developed a real affinity for this meteorite and the people and places that play a part in it’s historic story.

5) Do you have a website where people can go and look at what you do?

Yes, my website is www.msg-meteorites.co.uk  It is a work in progress and I try and update it when I can but there is much still to do!  I have a section to showcase my collection and an adventures section where I load up articles and photos of any meteorite related trips or events that I attend.

I am also an active member of the British and Irish Meteorite Society (BIMS) and our website is a great place to start for meteorite related information.

6) Is it true that earth is hit by meteorites every day?

Our planet is bombarded daily with material from outer space with estimates ranging from 20,000 to 60,000 tonnes falling on Earths surface each year! Most of this falls as tiny dust sized particles but some are larger,  from pea size through to multi kilogram individuals.  Much larger multi tonne meteorites even have the potential to bring death and destruction to our planet. Numerous large crater forming meteorites have changed the course of evolution, wiping out certain animal groups such as the dinosaurs and helping create new conditions to facilitate the progress of others.  However meteorites may also be responsible  for sowing the seeds of life on Earth, possibly bringing water and organic compounds that could have kicked off the chain of evolution of life on Earth!

7) How long have you been studying meteorites?

I have been collecting meteorites since 2007, my first specimen being a small Campo del Cielo crystal (which of course I still have) I am in awe of these rocks from space and just  to hold something in your hand  that is older than the Earth that we live on still blows me away every time. Being able to look back in time in such a real and tangible way is amazing. The feeling of wonderment and sense of perspective that this gives you never goes away and in fact only deepens as your knowledge increases.

8) How fast do meteorites travel when they come through earth’s atmosphere?

First, just to clarify meteorites aren’t actually meteorites until they land on earth (or other planetary body) pre atmospheric entry they are called meteoroids. The flash of light that you see as they enter our atmosphere is a meteor, so the term meteor actually only refers to the light phenomenon rather than to the object itself.  Meteoroids enter our atmosphere at between 11 km/sec (25,000 mph) to 72 km/sec (160,000 mph) The big variation between these speeds is down to the speed of the earth, which is travelling at about 30 km/sec (67,000 mph) and rotates at 460 metres per second (1,000 mph) If a meteoroid is catching up with the earth then the actual speed will be lower whereas if it travelling towards the earth’s direction of travel then it will be higher. In the same way as the difference between two vehicles travelling at speed either colliding head on or one colliding into the rear of the other from behind.