To see all the photos from this event please see here

I can’t recall exactly when but at some point in 2013 prompted by posts on social media I contacted Andrew and Sue Davies about a prospective new astronomy show they were putting on in October. After initial contact by email I then spoke to Andrew on the phone and on behalf of BIMS I outlined our background and aims as an organisation and listened to Andrew do the same concerning their proposed North West Astronomy Festival. Andrew and Sue own and manage ‘The Knowledge Observatory’ a company run as a social enterprise using their interest and knowledge of astronomy as a learning incentive for young people who have disengaged from compulsory education. Their backgrounds are in teaching and they both have a genuine passion for offering hope and a future to young people who have not benefited from the conventional education system. Andrew’s love of astronomy is interweaved in this endeavour and used as a hook to harness natural curiosity in such a fascinating subject and combining this with English, Maths, ICT and life skills with an aim of re igniting a love for learning. Andrew explained that their aim was to use astronomy events such as the proposed festival to help raise funds for their education enterprise. He spoke passionately about ‘The Knowledge Observatory’ and with a tagline of ‘Igniting passions, inspiring minds, transforming futures’ it was obvious to me that here were a pair properly dedicated to their job. On the strength of this conversation I made the decision to immediately offer BIMS services to run a meteorites outreach display at the North west Astro fest 2013.

In the run up to the festival I corresponded numerous times with Andrew and Sue and discovered many shared interests and passions which led to the beginnings of a great friendship. Both myself and Andrew are trained chefs and share a love of food, especially French food. I found out that they both have a passion for France and indeed are looking to buy a house over there, as I am half French we did indeed have a lot to talk about! 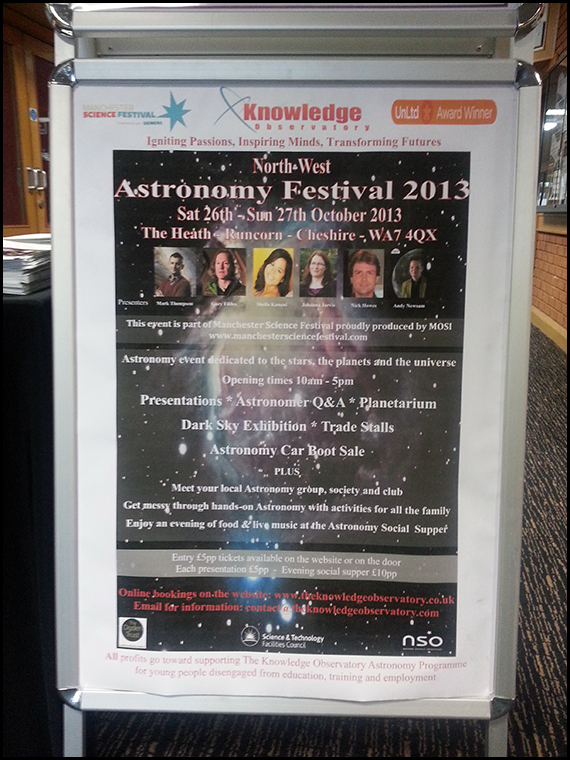 Some of the talks being given at the festival.

The inaugural North West Astro Fest took place on the weekend of the 26th and 27th October 2013 at The Heath, Runcorn, Cheshire and was the first event of its kind held in the North West. With a good mix of activities, displays and lectures, there was something for all ages and all levels of experience. Myself and Luther arrived early on the Saturday morning to setup our display whilst Graham could only join us for the Sunday. Most of the other exhibitors had arrived and setup on the Friday night so Luther and I had a rushed couple of hours to get setup in time before the official opening. 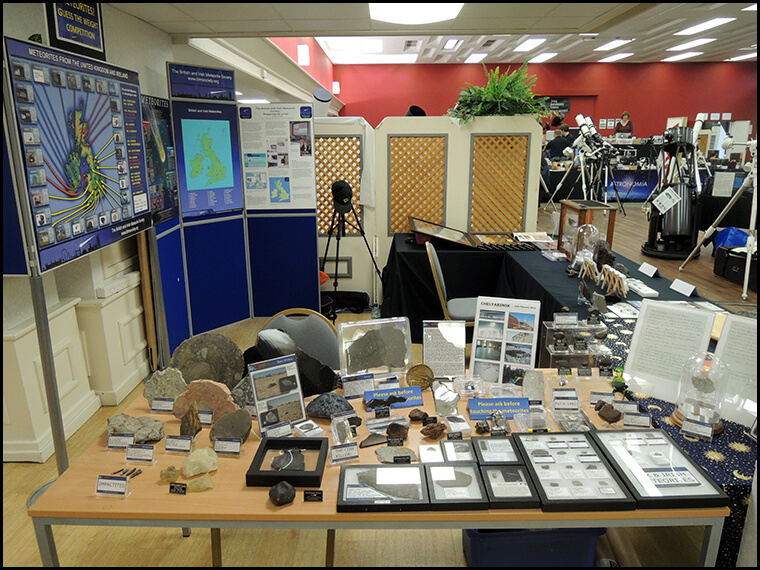 Mine and Luther’s specimens on our tables. Graham couldn’t join us until Sunday.

We had our usual selection of meteorite, tektite and impactite specimens brought from our own collections. Amongst others I had my assortment of UK and Irish meteorites and Luther had a nice array of pieces from his collection. New pieces for both of us were some nice Beni M’Hira individuals and slices along with in situ photos and the book published on this newly discovered Tunisian strewn field. We also both had Chelyabinsk specimens which proved very popular as this amazing and historic event was still very fresh in peoples minds. Two major new additions to my collection were my 275 gram slice of Allende from Bob Haag and my 95 gram piece of Barwell newly acquired direct from the original finder. We did eventually get setup in time even with the usual distractions of other stall holders getting early peeks at our display and engaging in conversations about amazing space rocks. 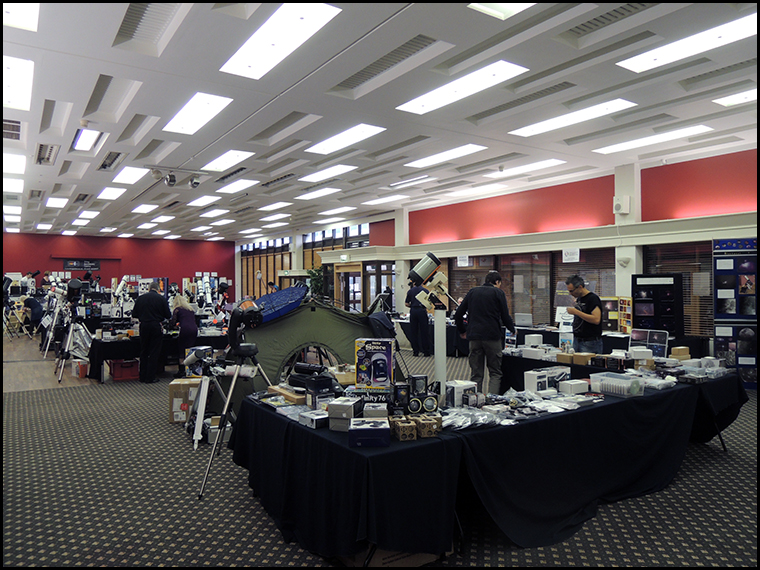 The main hall where we were situated.

The official opening, although quieter than expected gave a steady stream of visitors to our stand and it was indeed great to have more time to engage with the public and enjoy more protracted conversations on our favourite subject 🙂

We were situated in the main exhibition hall along with a good mix of astronomy trade stalls, space memorabilia sales stands, North West based astronomy groups and many others.  There was also another large hall which contained more space outreach displays from Liverpool John Moores University and UKSEDS (UK Students for the Exploration and Development of Space) This space also housed a planetarium dome which always had a queue of visitors throughout both days of the festival. 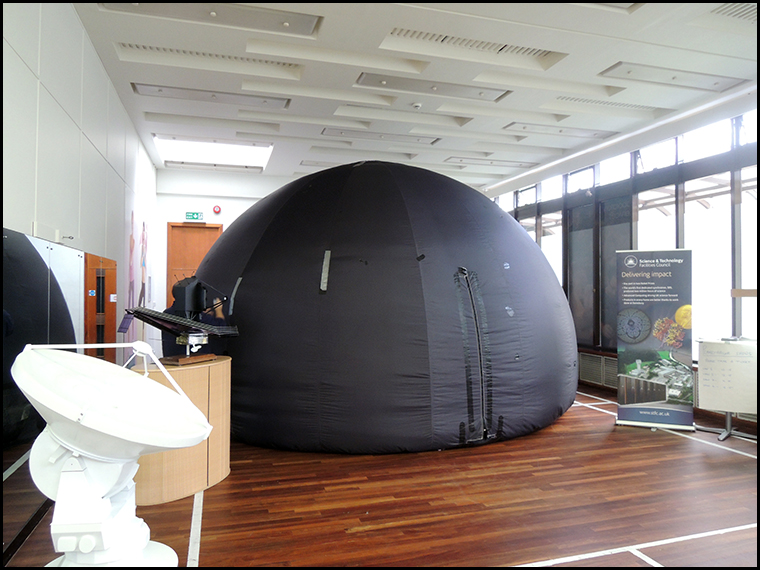 The ‘Space dome’ planetarium which was popular with visitors.

Throughout the Saturday there were a number of presentations from different invited speakers. Sheila Kanini kicked off the talks with a presentation titled ‘A solar system family portrait’ followed by Mark Thompson from BBC stargazing live with ‘A down to earth guide to the cosmos’ Mark then  later signed many copies of his book of the same name. Nick Howes presented the very latest data on comet ISON in his talk titled ‘A tale of two comets’ Nick was joined by Andrew who gave a practical demonstration of how to make a comet during his talk.  Nick, Mark and Andrew along with the other presenters also took part in ‘Astronomers question time’ that was chaired by Dr, Joanna Jarvis from the Open University and which was very popular with the audience. 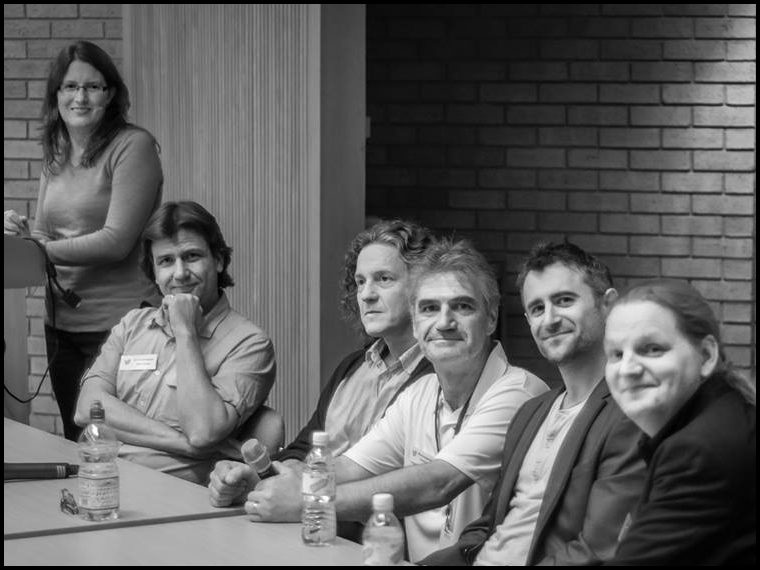 As per usual we ran a competition to win a meteorite by guessing the weight of the Campo del Cielo specimen on display. This is always popular and was no different on this occasion with many people coming back a few times before finally committing to their guess. I had also donated a meteorite to the festival raffle and this proved to be the only negative of the weekend as it was stolen from the raffle table sometime during Saturday. I did of course replace it with another specimen as it had garnered quite a bit of interest on the raffle table and I didn’t want anyone to miss out on winning it. 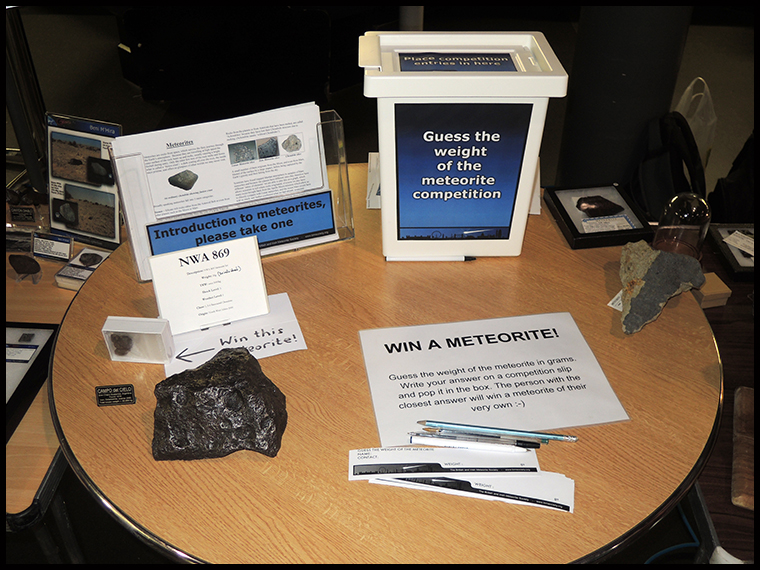 Our guess the weight of the meteorite competition proved very popular!

There was entertainment and food provided on the Saturday evening and this was a great opportunity to make new friends and extend conversations started during the day. Alcohol of course always loosens tongues and so later on in the evening I enjoyed a heated debate with some of the exhibitors from Astronomia. After I went missing for a while Luther came over to join the enthusiastic conversation after witnessing my animated gestures from all the way across the hall, good times 🙂  I don’t know whether alcohol played a part in some of the staff and presenters performing a ‘flash mob’ rendition of astronauts Chris Hadfield’s Space Oddity but I can hazard a good guess! Nick Howes also strutted his stuff on stage performing an impromptu rendition of ‘Summer of 69’. It was a really nice night and it was great to see everyone mingling and having a great time 🙂 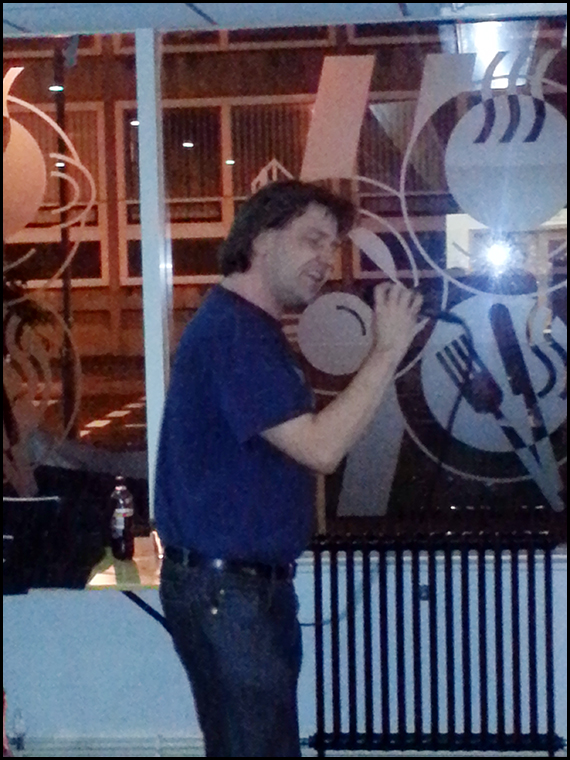 On the Sunday morning we were joined by Graham and we both helped him unpack and set up his meteorites. As usual this took longer than expected as we all showed off any new or recent acquisitions. One of Graham’s new pieces was his slice of NWA 5000, this amazing part slice looks like the silhouette or shadow of a man studying a rock against the curved horizon of the moon with stars and asteroids in the night sky behind, a truly remarkable slice! It was also noticed there was a similarity between the character in shadow/silhouette and Luther 🙂 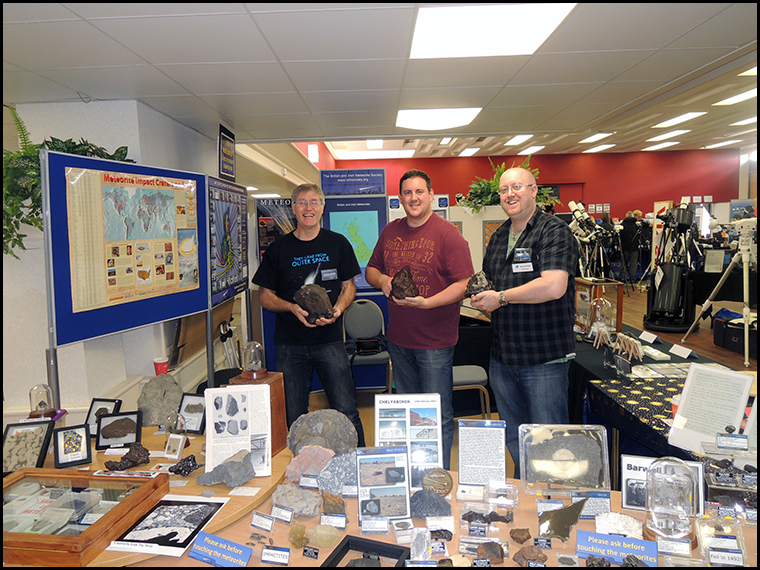 Sunday’s talks were from Gary Fildes from Kielder Observatory on his visit to the Very Large telescope (VLT) in the Atacama desert and Andy Newsam presenting about the National Schools Observatory during his talk titled ‘Exploring the dynamic universe’. Unfortunately due to having to man our display we were not able to attend any of the talks over the weekend but we heard from people who had that all the speakers were very engaging and spoke passionately on their different subjects. 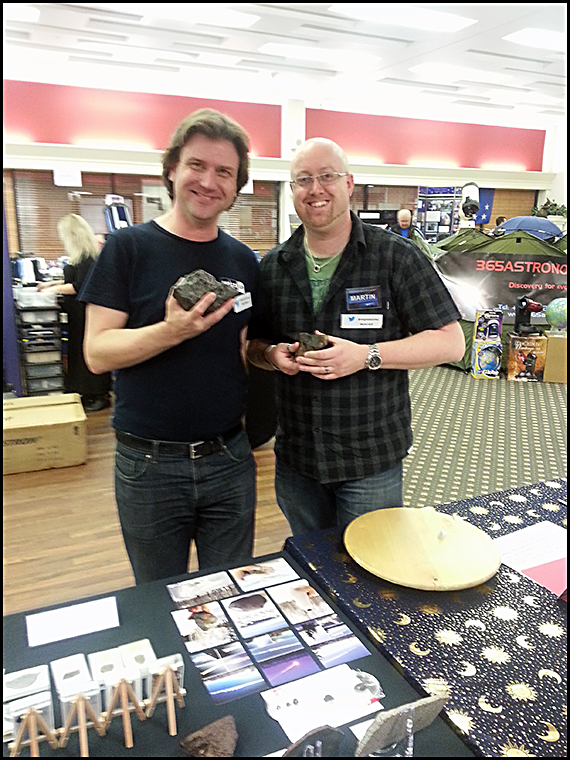 Mine is bigger than yours Nick 😉

As there was three of us on Sunday it also gave us more time to go and see the different stands and displays on offer and chat to the vendors and stall holders. There were a good few astronomy equipment shops with stalls there with a huge array of telescopes and associated equipment on display. It was nice to see some other meteorites on display too on the UKSEDS stall along with some excellent displays that were fascinating a group of kids when I stopped by. Really great to see children enthused and excited about space and science.

We also spent a bit of time at our stand with Nick Howes, Nick is good friends with our very own Meteorite Man Geoff Notkin and Geoff had told me to look him up. Nick also brought along a nice meteorite to show us that he has currently submitted for further work to be done on it. Nick is a great advocate for space science and someone who does a lot of public outreach and it was good to meet him face to face after previously chatting on twitter. 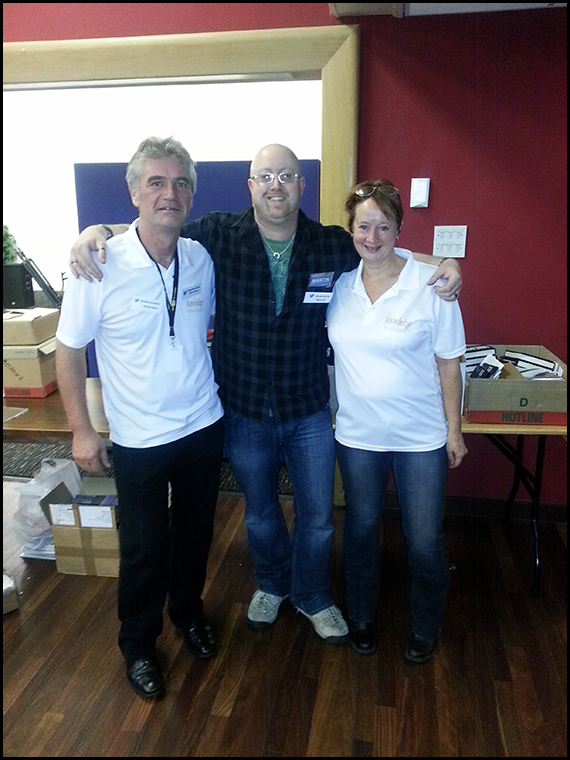 Me stood with Andrew and Sue Davies who pulled off an amazing inaugural event which will hopefully be the first of many! 🙂

When we returned home we went through our 300 plus competition entries to find a winner, and the name pulled out of the hat was Emma Williams-Tully who turns out to be Nick Howes’ sister! The winning guess was only 45 grams off the exact weight of 5391 grams and Emma thanks her dad for his expert guess 🙂 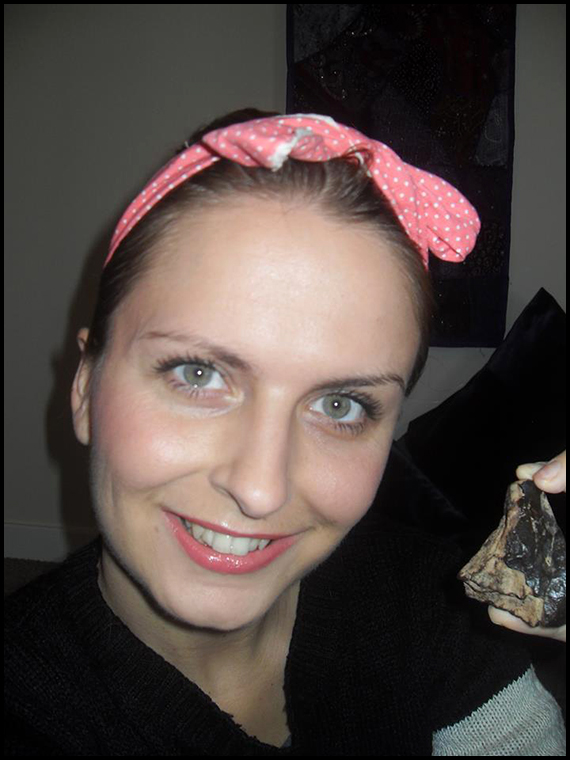 Gues the weight of the meteorite competition winner – Emma Williams-Tully 🙂

Later on I received some excellent feedback on our display from Andrew and he also told me that they had picked a winner for the meteorite raffle prize.  The winner was a secondary school geography teacher who was thrilled to have won it and who now uses it in her lessons 🙂

So overall the event can be deemed a great success and indeed the dates are already set for North West Astro Fest 2014 (12th and 13th October) Andrew and Sue obviously want to increase the visitor count but want to do this without losing the atmosphere which was praised by many who attended. A challenge indeed to keep the intimate and personal feel whilst also making it a bigger and better show. Knowing Andrew and Sue as I now do, one thing is for sure and that is they will give it every effort and will succeed in growing this event and making it a date for the diary every year. I have already booked in our meteorite display for the 2014 show and am very much looking forward to attending again 🙂

Our resident BIMS videographer has as usual done an excellent job and produced a short video of our display which is shown below, Thanks Luther 🙂

To see all the photos from this event please see here