Why do we collect meteorites?

The following article was featured in the inaugural copy of ‘Space Rocks’ magazine released in February 2016 and is published here with permission of the Editor Michael Johnson.

Meteorites are amazing, inspiring and enigmatic objects with multiple layers of interest. We, as collectors, know that all too well and we pursue different collecting strategies that echo this variety. This makes the question ‘Why do we collect meteorites?’ all the harder to answer in a simple, concise way. What exactly is it that drives us to add more and more space rocks and associated items to our display cabinets and drawers? To try and answer that question let us begin by asking why we collect anything at all?

Some of my own display cabinets housing my meteorites.

According to many sources about 35% of the world’s population collect something. The reasons that people collect vary hugely, as do the ways in which they build their collections. For some, such as sports fans, star-struck music lovers or wide-eyed celebrity spotters, it is a way to show off their loyalty to their chosen team or their passion for their favourite pop star or celebrity. For others, like numismatists and philatelists it can be a very precise search for every last coin or stamp of a particular type or issued by a particular country. Collecting can be the pursuit of the mundane and ordinary that get elevated through being collated together to make them extraordinary. People of course collect items that are rare or of value but they can also collect everyday, practical and what most would consider throwaway items. From the rare, historic and expensive to the common, contemporaneous and cheap, from cars to disposable plastic bags, people can lavish equal care, attention and obsession on their chosen collectable commodity. Collections can be managed with great attention to detail, be organised, labelled and catalogued or can be haphazardly accumulated with little thought other than addictively pursuing the next acquisition. All levels from the casual to the obsessive and everything in between are represented in collections the world over.

Of course, what is treasured by some is considered rubbish by others and the sheer variety of items that are collected is huge. Some of the strangest objects that I have come across that feature in peoples’ collections are: back scratchers, banana labels, toothpaste tubes, umbrella cover sleeves, water bottle labels, nails, traffic cones, airline sick bags, hot sauce bottles, super soakers, erasers, hotel ‘Do not disturb’ signs, and even belly button fluff! The phrase ‘Each to their own’ certainly applies to collectors!

So what makes a collector collect? What drives people to spend so much time and effort pursuing inanimate objects and how do those inanimate objects end up provoking an emotional response in people? Is it a throw back to times past where an ability to attract potential mates was influenced by showing off the ability and skill to find and collect the things needed to survive? Can collecting give a sense of completeness by filling a hole in a life devoid of meaning? Existential anxieties and fear of the unknown can transfer ideas of identity, self and security onto belongings. Giving inanimate objects an importance and a sense of order can give purpose and help in getting through everyday life. Building collections around us can also represent an extension of personalities and beliefs. Collections agonised over and built up through dedication and hard work can be a tangible extension of people’s personas and can live on when they are long gone.

Many psychoanalytical explanations go right back to childhood to try and explain what makes collectors tick. We know that children can attach great significance to belongings such as favourite toys and can derive much comfort from them. Control over emotions and surroundings is developed through possession and ownership of these ‘things’, while fears, worries and insecurities are blown away. This achievement of order and control can resonate in later life as placing an intrinsic value on ‘things’ and a proclivity to accumulate. The ultimate Freudian view is that collecting stems from unresolved issues of toilet training as an infant. Collecting is, in Freud’s view, a direct response to the loss of bodily control when you flush away what was once a part of you. Interesting maybe, but I’m not sure that Sigmund’s bathroom analogy really stands up to scrutiny for most collectors today.

Following neatly on from Freud’s extreme position comes the dark side of collecting, where we enter the realm of hoarding. As opposed to an increase in order and organisation, hoarding can lead to a loss of control and necessitate making changes that affect daily routine and interfere with living a normal life. The differences are clear: a collection is generally neatly organised, looked after with care and well presented, and even if not, objects are collected for a reason and with a purpose. Hoarding is the opposite: worthless items are continually accumulated without any order or strategy and piled up with no thought for neat presentation or organisation. Collecting is a life-enhancing hobby whereas hoarding is an unhealthy compulsion. 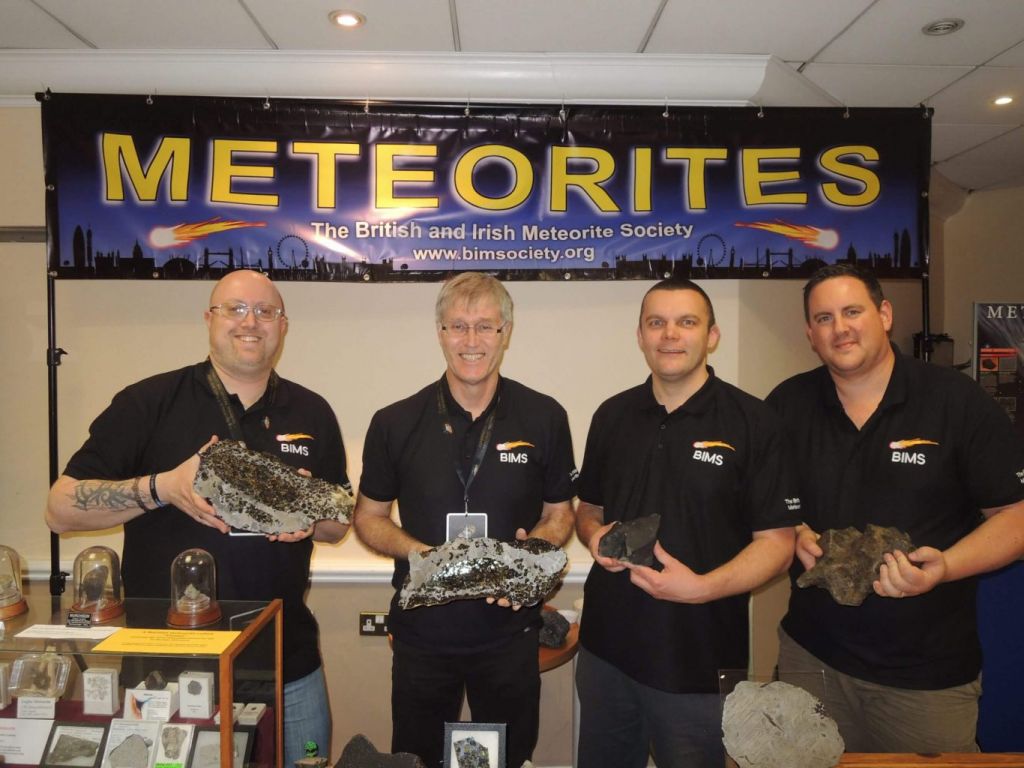 Collecting is not simply the accumulation of objects. It can be a very serious, intellectual pursuit, can satisfy an itch to see and experience more, be an exciting treasure hunt and fulfil a deep desire to look after and be the custodian of rare and beautiful objects. It can of course also develop into an obsession but most of all it is a very rewarding and immensely satisfying challenge. Does collecting make a person happier and more fulfilled or are people collectors because they already are happy and fulfilled? Whichever way you look at it, from a collector’s point of view collecting is usually seen as a positive, enriching and fulfilling aspect of their lives. 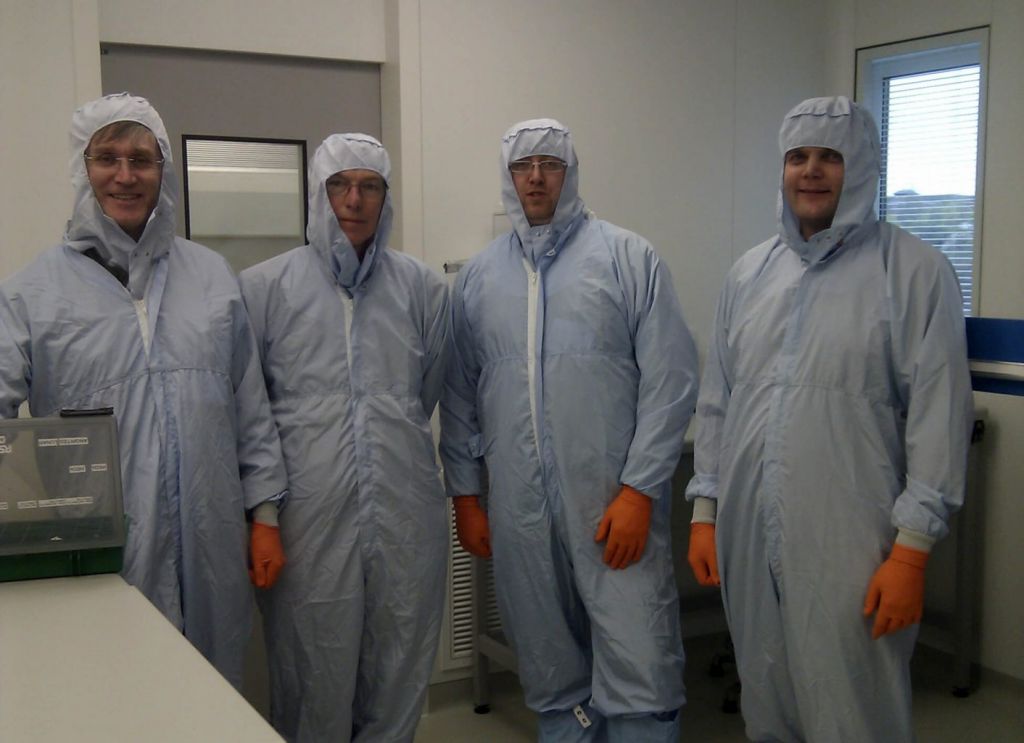 So, those are the generalities of collecting, but what about the specifics of collecting meteorites? Meteorites are fascinating objects and their many layers of interest mean that there are numerous collecting methodologies and strategies that are employed by collectors. All the elements that can make things attractive to collectors are inherent in rocks from space. They are rare, scientifically important, often have a human-interest story, can be highly valuable and can come in many different types and forms. They can be prepared and made into slices, fragments and thin sections so can be accommodated by different budgets and display spaces. They can also be categorised into various lists according to different criteria, meaning collectors can strive to fill gaps in their collections but also have an endpoint in view for completion.

A few possible collecting strategies that collectors follow are listed here although there are many other ways to build up collections than these.

– Meteorites they have found themselves.
– By location (continent, country, state or county).
– By type (stone, iron, stony-iron).
– By class (ordinary chondrite, achondrite etc).
– By type specimen (eg. Nahkla for Nahklites, Rumuruti for Rumurutiites)
– Scientifically important or rare types.
– Historical specimens from old collections.
– Meteorites with an interesting story.
– By specimen type (individuals, slices, endcuts or thin sections)
– Planetary or lunar specimens.
– Witnessed falls only.
– Meteorites that have hit something man made (hammers).
– Only oriented specimens.

Of course collecting meteorites is much more than just the accumulation of more specimens. After spending some time in the meteorite community you build up relationships with other collectors, dealers and scientists. Attending some of the meteorite shows held around the world such as Tucson, Denver, Munich, Ensisheim and St. Marie aux Mines is just as much about enjoying and enhancing these friendships as it is about adding new specimens to the collection. There are also opportunities to hunt for specimens yourself, and finding a meteorite on the ground certainly beats buying one on Ebay. 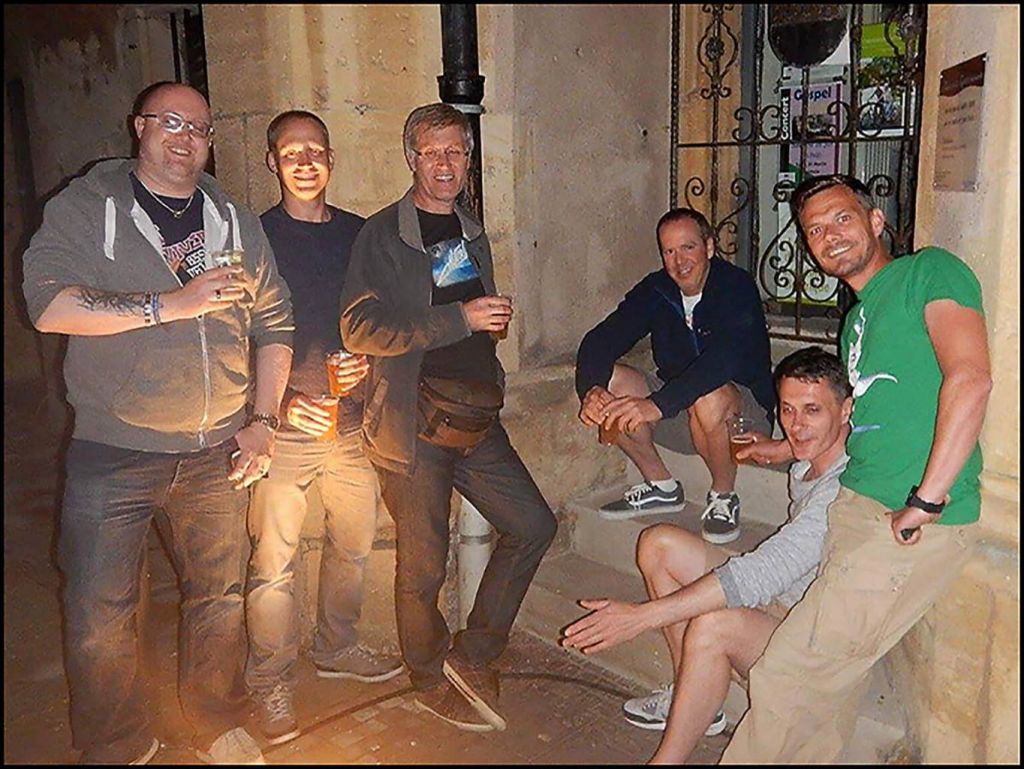 Sharing a few beers with like minded friends adds a lot to the joy of collecting meteorites. (Photo courtesy of Dave Gheesling)

There are various groups, societies and clubs available to join, both online and in person, and these are guaranteed to enhance your collecting experience. Sharing news, opinions and new specimens with others who have the same passion adds another dimension to your collecting. Outreach is an important role of some of these groups and spreading the word about meteorites to the public can become a big part of why you collect. Seeing a huge smile on the face of someone holding a piece of the Moon or Mars, or an iron meteorite that was once the beating heart of a large asteroid, is addictive. These days I find that many new additions to my collection are acquired because they show a particular feature or aspect of meteorites well. Being able to show a perfect oriented specimen with a rollover lip that people can see and hold is far better than any classroom explanation. I have found that sharing my collection at outreach events has made it much more important in my eyes and has added massively to my enjoyment of the hobby. Inspiring children to have a fascination with rocks from space is especially rewarding and to think that holding a meteorite from your collection could plant a seed that influences a career or life choice can definitely put a smile on your face for a very long time.

A beaming smile on a child’s face whilst holding a real rock from space is the reason why collectors do outreach.

The depth of engagement with meteorites varies between collectors and all levels are of course valid. I think most collectors experience a feeling of awe when handling rocks from space. For some that is the only reason they collect while for others a passion is ignited and more knowledge is craved. The voyage of discovery is progressed by reading books and journals, perusing online forums, attending meetings and engaging with other collectors.

Of course the question posed at the beginning of this article was a rhetorical one, as we all know the answer very well. Better to put the question another way: ‘Why on earth would you not collect meteorites!’? The thrill of not only space travel but time travel too can be had without leaving your armchair. With a piece of the Moon in one hand, a piece of Mars in the other and a meteorite book on your lap, the solar system is yours to explore!

25 strangest collections on the web by Alex Santoso

These 43 people collect the weirdest things ever! By Kid Krunk

The problem with using psychology to explain collecting by Daniel Faris

The psychology of collecting by Mark B. McKinley