When Comet Hale Bopp was brightest in the sky in 1997 Derek Gray took this photograph with the Wold Cottage monument visible  in the foreground.  Derek along with his wife Katrina are lucky enough to own and live at the historic Wold Cottage. 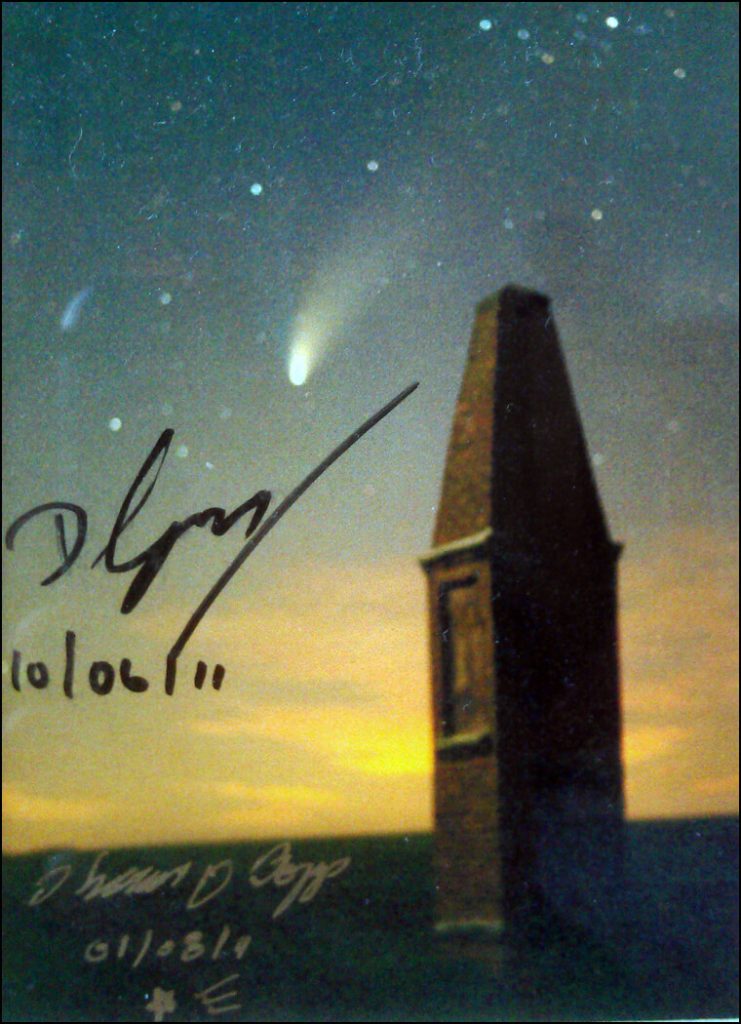 In June 2011, myself, Dave Gheesling and his daughter Maddie were staying at the Wold Cottage as guests of Derek and Katrina Gray. We spent a fun day in York also in the company of Graham Ensor and his niece Melanie visiting the York museum where we had hoped to view the amazingly oriented Middlesbrough meteorite but were disappointed to discover that it was not currently on display. We all finished off the evening along with Derek and Katrina in the ‘Falling Stone’ pub where we enjoyed fantastic food and good beer! 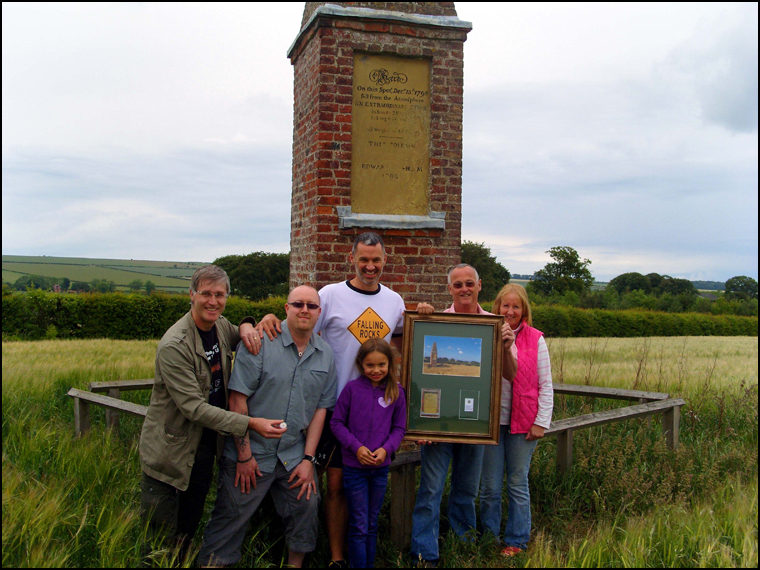 Back at the Wold Cottage myself, Dave and Derek were enjoying a post prandial whisky or two when Derek kindly gave us copies of his photograph of comet Hale-Bopp.  Dave then mentioned that he was friends with Thomas Bopp the co discoverer of the comet and asked Derek to sign the prints and later arranged for Thomas to sign them too. He then very generously arranged for these to be framed along with a descriptive plaque and sent one to myself and also to Derek and Katrina.  Along with mine and Derek and Katrinas framings, Dave has one and there are two others making five in total. 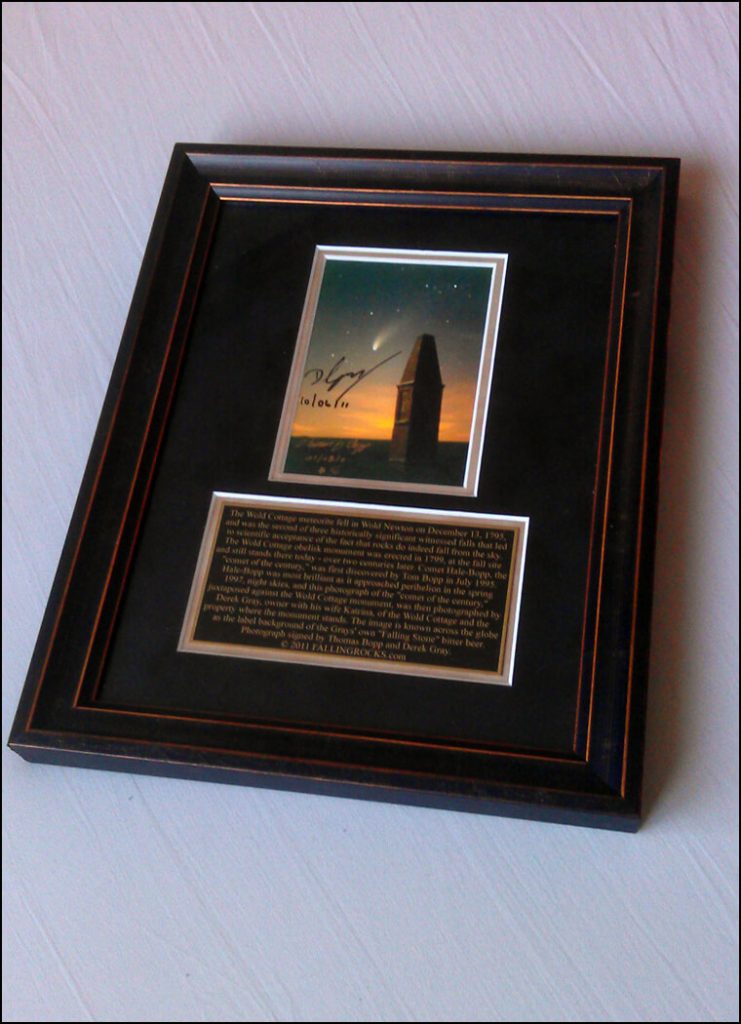 The inscription reads as follows:

The Wold Cottage meteorite fell in Wold Newton on December 13, 1795,

to scientific acceptance of the fact that rocks do indeed fall from the sky.

The Wold Cottage obelisk monument was erected in 1799, at the fall site

and still stands there today – over two centuries later. Comet  Hale -Bopp, the

“comet of the century.” was first dicovered by Tom Bopp in July, 1995.

1997, night skies, and this photograph of the “comet of the century.”

juxtaposed against the Wold Cottage monument, was then photographed by

Derek Gray, owner with his wife Katrina, of the Wold Cottage and the

property where the monument stands. The image is known across the globe

as the label background of the Gray’s own “Falling Stone” bitter beer. 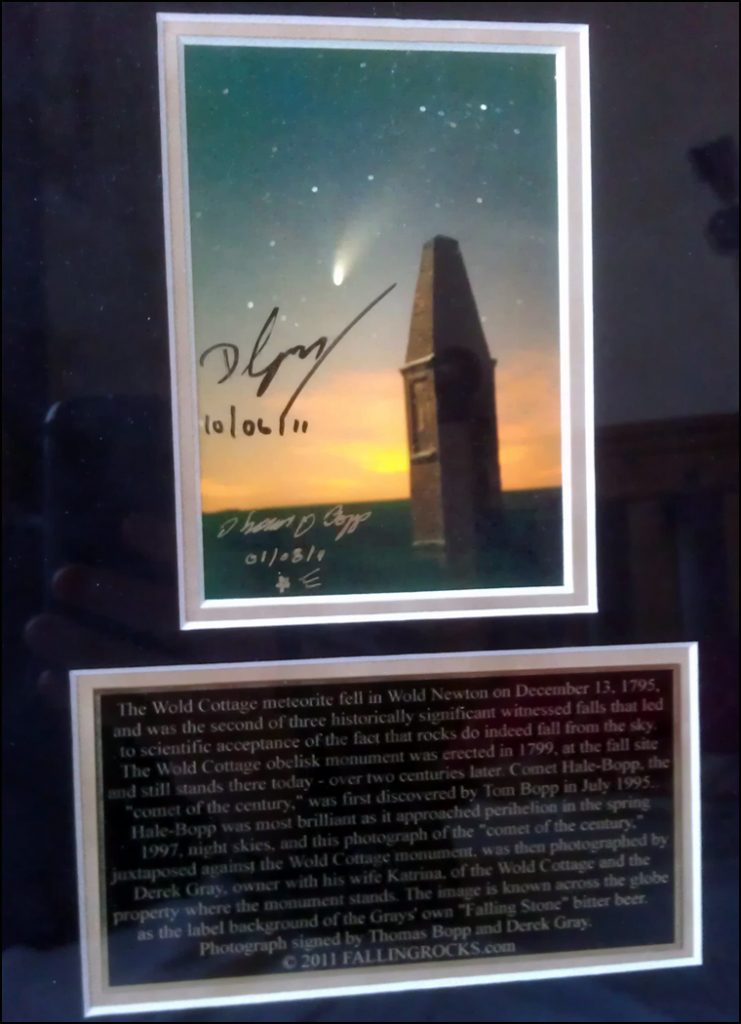