Link to Chiang Khan in the Meteoritical bulletin

The following text has been written entirely by oliver Alge and is reproduced here with his kind permisssion along with some of his expedition photos. It makes no sense to attempt to re write the fall circumstances when it is best said in his own words.

“In the early morning hours of November 17,1981, at about 5.30 AM, the inhabitants of Ban Klang and Chiang Khan in the Thai province of Loei observed in the sky a fireball, which exploded over Ban Klang with tremendous thunder. This event was witnessed even in Bangkok, some 500 km away. The explosion was followed by a rain of stones which reached over the frontier river Mekhong into Laos.

After the fall, the inhabitants of Chiang Khan, Ban Klang and of some smaller places in the area gathered the meteorite fragments scattered in their settlements and rice fields. A few days after the occurrence, scientists from Chulalongkorn University, Bangkok, arrived at the site and managed to secure 31 pieces with a total weight of 367 grams. (And some weeks later another piece of about 800 grams.)” 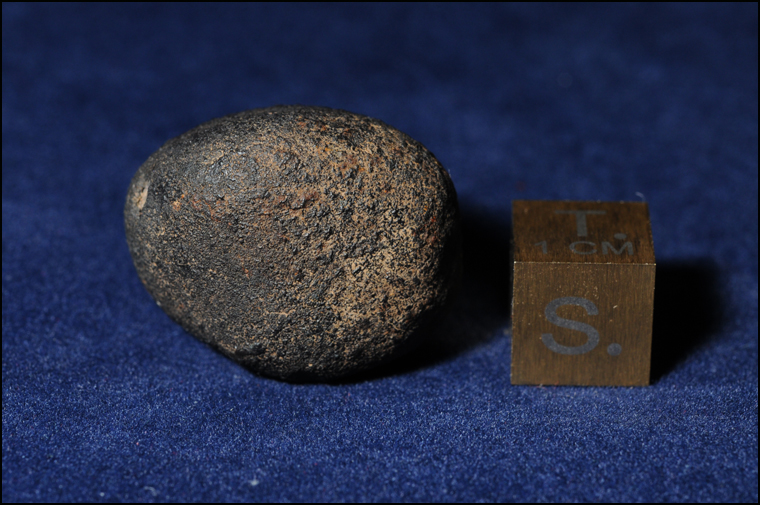 “Situation in Laos: Due to the political circumstances prevailing in Laos at that time, there are hardly any testimonies about this meteorite fall from there. My Chiang-Khan expedition 2000 was initially intended to last one week only, but actually I spent the whole time from November till the end of February 2001 (and again 6 month) in the strewnfield and was able to shed some light into this darkness.

I met a Laotian army officer who, right after the fall, was entrusted by the government with the task of seizing all fallen stones from the locals (threatening people with punishment!), in order to hand these specimens over to the authorities in Vientiane. People were told that this was dangerous Thai material. Subsequently, the specimens are said to have been sold to the Soviets.” 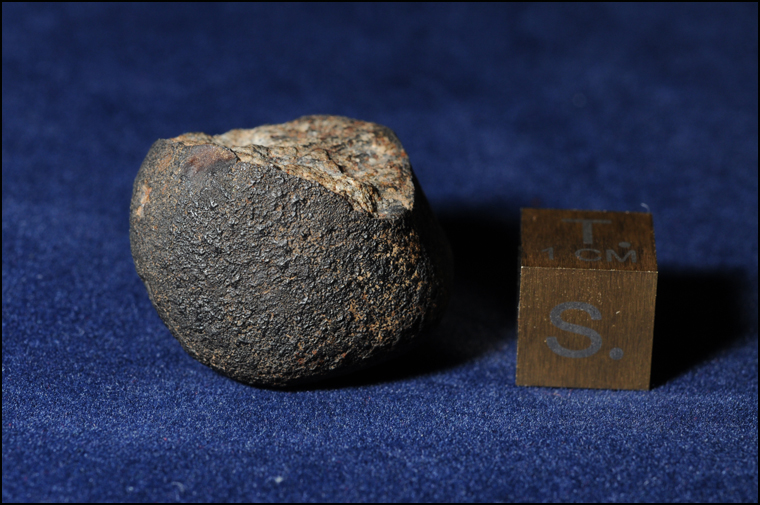 Another view of 17.5 gram specimen 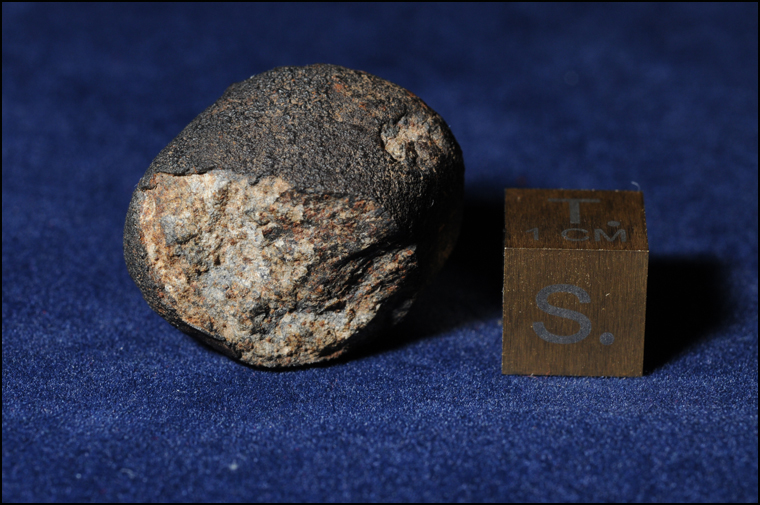 “About half of the persons I interrogated declared a fall direction opposed to the one officially published: according to them, the fireball travelled southwards, to Thailand, coming from the North (Laos). With Thai observers, this variant of the reports is easy to explain: The tense political situation of those days induced the population to conclude that Laos had fired missiles against Thai territory during the night.” 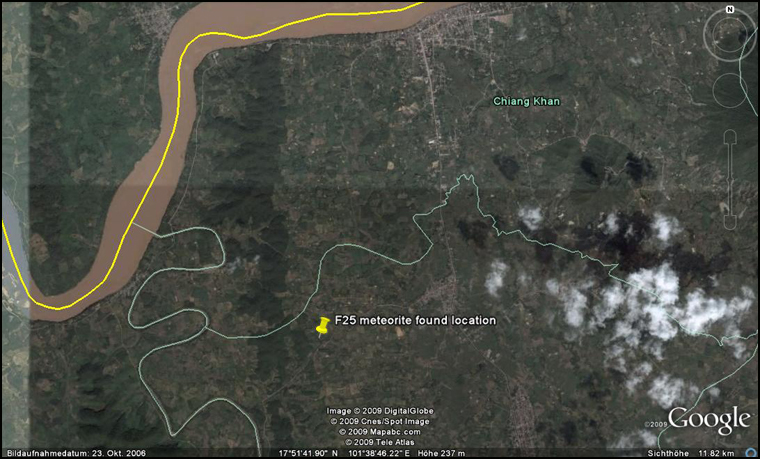 “Due to the time of the fall, hardly anybody will have witnessed the event visually; the enormous explosion jerked people from their sleep and then engendered this story as their first thought.
I personally convinced myself at 5.30 AM in Ban Klang that except for a few dozen dogs sleeping in the streets, no more than a handful of people could have experienced this natural spectacle.
Such fall reports by Laotians, on the other hand, can only be explained by yet another meteorite fall. The aforesaid Laotian army officer saw the fireball coming from the North. He was on night watch in Bagmee when, at about 3 AM, he saw the fireball detonate at an angle of some 45 degrees to the observer.
Almost all reports from Laos contain a different fall time and a North-South motion.” 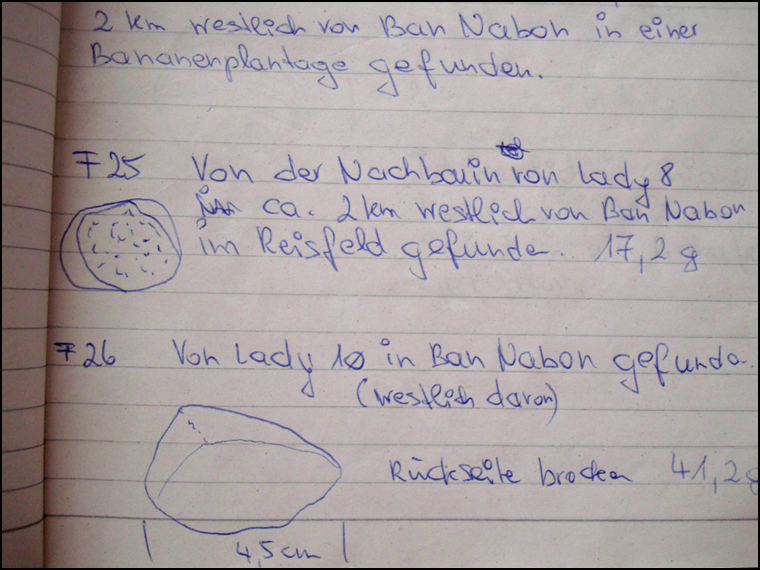 Oliver Alge’s field notebook entry for the above 17.5 gram specimen numbered F25  , written in German the entry translates as “The meteorite (F25) was found in a rice field from a neighbour of lady 8,  around 2 km out of Ban Nabon in a west direction. ”   Oliver gave all ladys a number as they had almost the same name.  Compare his sketch with the photos of my specimen above.

“A Thai fisherman gave a further fascinating account: at said time, he was on the Mekhong river, where he had cast his net to gather some fish for breakfast. He beheld the “devil’s ball” coming from South, and soon it vanished with a mighty burst. He had to seek shelter against the falling stones under a wool blanket, and the pieces that, in quest of a new home, were laying siege to his boat filled both his hands. Afterwards, he said, he had thrown “the ugly black stones”, which for sure meant no good, into the river.
Nobody was able anymore to give precise indications as to the exact date of the event. Some 20 years ago it was, so they say, in the month of November, without doubt – that’s what I was told in the villages of the strewnfield.” 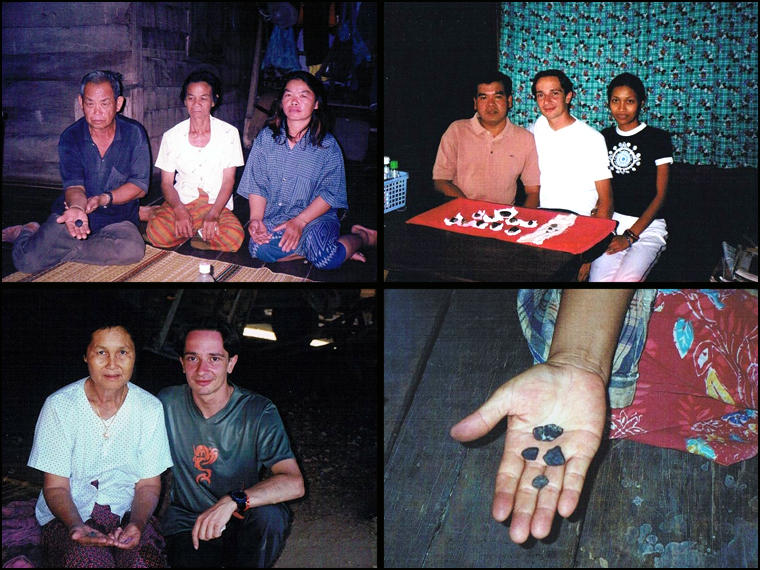 “Whatever it was that happened then – one is led to presume a second meteorite fall on the same day or on the day after. According to recent research (isotope analysis), the two large specimens, which are in private Collection and in Chulalongkorn University, Bangkok, do not originate from the Chiang-Khan fall. They are believed to have been transported into Thailand from Laos. Two small pieces from Thailand were analysed, one is H4 tending to H5; one was determined to be H5 in Japan, whereas the large pieces are H6. Most of all, the noble gas contents of the large specimens differ extremely from those of the Chiang-Khan pieces!

Chiang Khan is certainly going to puzzle scientists for some more time to come.” 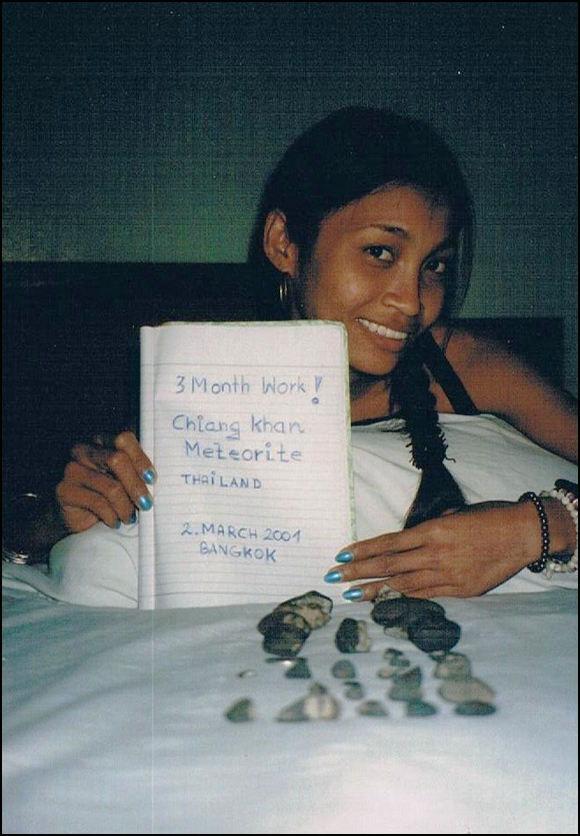